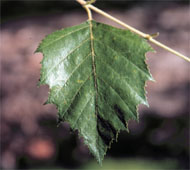 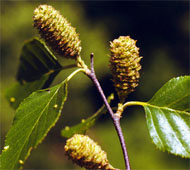 A champion specimen of this tree in Hamilton County, Ohio measured 87 feet tall in 1985. Unlike other kinds of birch tree, the fruits of the River Birch mature in the spring following flowering. The trunk of this tree often is short, branching into several large limbs that grow upward. The bark of younger trees is pinkish to reddish brown. When older it is shaggy and silver-gray to black. The River Birch favors moist soils and typically is found growing on stream banks and in swampy lowlands. In her book on The Woody Plants of Ohio, Lucy Braun calls this a "semi-aquatic species" since it can survive flooding for several weeks at a time. This tree grows throughout most of the eastern United States and westward to eastern Oklahoma and eastern Texas. It is more common in the South, where it is the only birch tree that is found at low altitudes. In Ohio the River Birch grows mostly within a small triangle of counties in the south-central part of the state. Although not of great commercial importance, manufacturers sometimes use it for furniture and woodenware. It also is planted for its ornamental value and is very effective in preventing stream bank erosion. 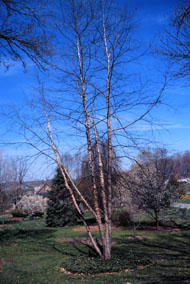 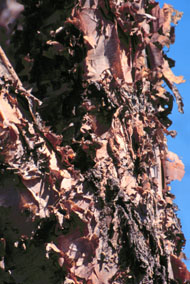 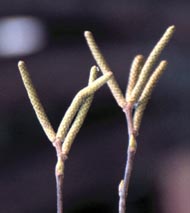