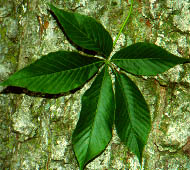 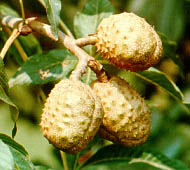 The name "Buckeye" presumably comes from local usage in the early days of settlement of Ohio. An early botanist found it on the banks of the Ohio River, and added "Ohio" to the common name in order to distinguish this species from the related Yellow Buckeye. Reportedly, native Indians called the fruit of this tree "hetuck," which has been translated to mean "eye-of-a-buck." Another common name is the Fetid or Stinking Buckeye, reflecting the aroma of its flowers, broken twigs, and bruised bark. This small to medium tree sometimes grows well above the common height of 40 feet. The tallest example in Ohio today (in Hamilton County) is 82 feet tall with a diameter of more than 4 feet. The bark of older trees is dark and is furrowed and scaly. The tree characteristically grows on bottomlands and on the banks of small streams and rivers. It is widely distributed in Ohio, but less frequently in the eastern part of the state. The wood is light, soft, and weak. It has been used for furniture and other construction, perhaps more so during the days of early settlement than today. The seeds are presumed to be poisonous to humans, but are eaten by squirrels. 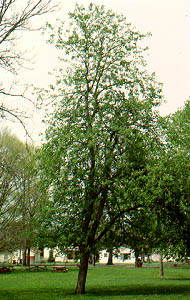 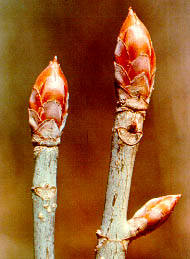 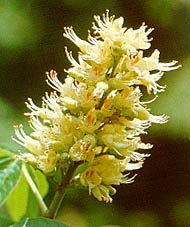