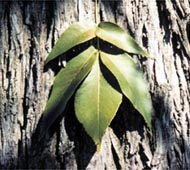 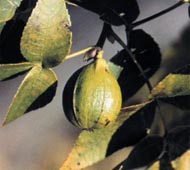 A champion Ohio specimen (Franklin County) was 120 feet tall in 1987. At that time, the crown of the same tree had a spread of 85 feet. The firm, gray bark, sometimes smooth, also may be marked in a sort of diamond pattern by shallow furrows and narrow ridges. This tree grows well in fairly rich, well drained to dry soils. It occurs with other hickories and with oaks, characteristically on hillsides and ridges. The Pignut Hickory occurs throughout most of the eastern United States and westward to eastern Texas. In Ohio it is found in the southernmost and eastern counties. As with other hickories the wood of this tree is tough and strong. It is used for tools and athletic equipment. The nuts of this particular hickory, unlike some of the others, are bitter and scarcely edible. 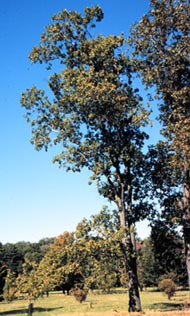 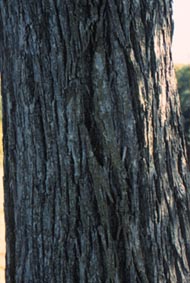