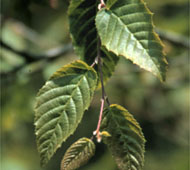 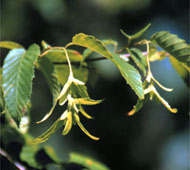 In 1985, a 41-foot-tall specimen of this tree was recorded in Hamilton County. The spread of the same tree at that time was 63 feet. The trunk of this tree is deeply rippled and looks like sinewy muscles. The bark is blue-gray and smooth. This combination of trunk and bark is unique, and it should confirm identification of a specimen. This tree, also sometimes called "Ironwood," and the Eastern Hophornbeam have an unusual history of confusion in common names. Each tree has at some time been called by the common name of the other. Also, because of similarities in the bark, the name "beech" (Blue Beech or Water Beech) has been misapplied to this tree. The American Hornbeam grows in moist to wet soils and commonly occurs in swamps, along streams, and in wet bottomlands. This tree grows throughout the eastern United States, westward to eastern Texas and Oklahoma, and in southeastern Canada. It is found throughout Ohio. Unlike the Eastern Hophornbeam, the wood of the American Hornbeam decays rapidly when in contact with soil. Still, the wood is hard and tough and is used in making tool handles and small wooden articles. Also, it is planted as an ornamental, especially on wet sites. Deer browse this tree's twigs and foliage. Squirrels and birds such as turkey, grouse, pheasant and quail eat the fruit. 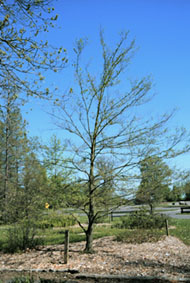 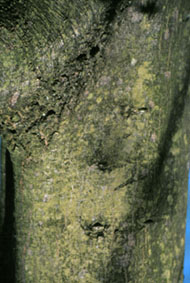 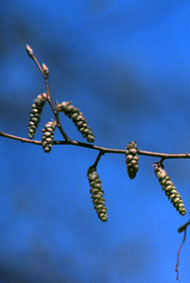