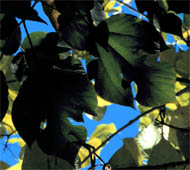 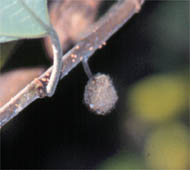 The leaves of the Paper Mulberry are distinctive in that they have a very rough, sandpaper-like upper surface and a soft, downy under surface. The bark is light gray and may be smooth or fissured. As with the upper-leaf surfaces the twigs of this tree are roughly hairy. A single tree produces either male or female flowers. In this country the male trees predominate, and the distinctive, showy fruit is not often seen. The Paper Mulberry does well in cities, is tolerant of dust, smoke and heat, and grows in poor soil. In fact, it does so well, spreading with ease, that in some areas it has become a pest. One author has described the culture of this tree to be "so easy as to be dangerous." This tree is native to China and Japan where the inner bark has been used in making paper, hence the common name. In parts of the South Pacific and in Hawaii people have made cloth from the bark. In the United States landscapers use the Paper Mulberry as an ornamental tree. In many areas it has become naturalized and grows wild, but only in warmer areas. The young twigs and branches will not tolerate severe winters. In Ohio it has been reported growing wild in several of the southern counties. 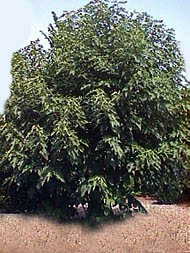 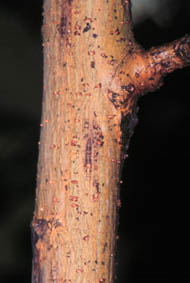