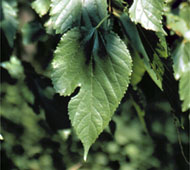 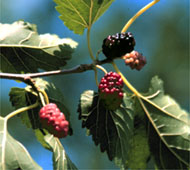 A 45-foot tall specimen of the Red Mulberry was recorded in Franklin County in 1986. At that time, it had a crown spread of 74 feet. The bark of this tree is dark brown, often furrowed into thin plates, and frequently peels off in long flakes. The Red Mulberry grows well in rich, moist soil, and usually is found in hardwood forests of bottomlands and foothills. Of the mulberry trees included in this program this is the only one that is native to North America. It grows throughout most of the eastern United States, except for the most northern parts, and westward to Kansas, Oklahoma and Texas. The Red Mulberry is widespread in Ohio, but is infrequent in the north-central part of the state. The wood of this tree is soft but tough, and is very durable when in contact with the soil. People use the wood in making furniture, fence posts and tools. The berries are edible and widely desirable, and a long line forms for them every year in the late spring: people, livestock, many kinds of birds, various other wildlife. 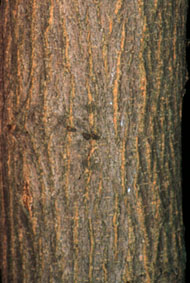