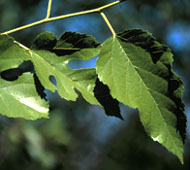 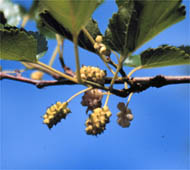 In 1988, a 48-foot tall specimen of White Mulberry was recorded in Perry County, Ohio. The smooth bark of this tree is yellowish brown in color, and becomes divided into scaly ridges. The twigs also are light brown. The White Mulberry grows well in warm, dry areas, and is resistant to drought. This tree is native to China. Before the American Revolution the British introduced it into the southeastern American Colonies in order to feed silkworms. That attempt to establish a silk industry failed. Today, however, the White Mulberry tree occurs widely in the United States, having been planted as an ornamental shade tree. It grows wild in the Pacific States and in many parts of the eastern states. This tree is found throughout most of Ohio, and it has been reported from more than 3/4 of the counties. One author reports that White Mulberry berries are of doubtful value: The "rather insipid fruit is favored chiefly by chickens, hogs, and children." Another author, however, claims that many birds enjoy the berries, and he broadens the human element to include "many people." The wood, apparently, is of no commercial value. 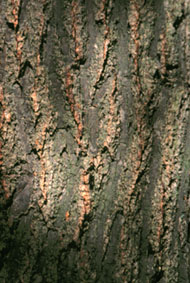 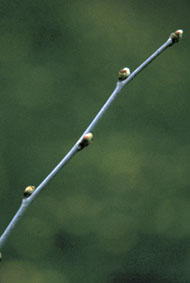 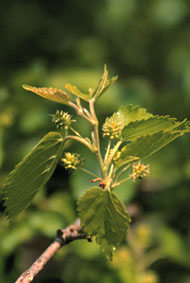