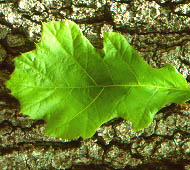 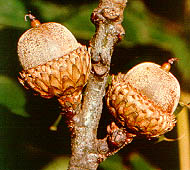 This is a large tree, sometimes growing more than 100 feet in height. At 104 feet, the tallest example in Ohio lives in Summit County. Another massive specimen in Pike County has an average crown spread of 93 feet. The thick, nearly black bark is marked with deep furrows and irregularly broken ridges. The characteristic inner bark is bright yellow to orange, hence the alternate common name. This tree grows on dry uplands, slopes and ridges. It occurs generally throughout Ohio, but is most abundant in the eastern part of the state and on the ancient, sandy beech ridges near Lake Erie. The wood, while hard and strong is not tough, checks while drying and generally is inferior to that of the Red Oak. Still, it is used in much the same ways. Historically, the inner bark was important for its tannin and as a source of yellow dye. The bitter acorn is inedible. 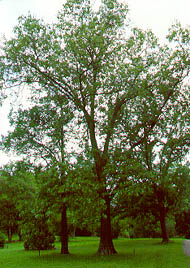 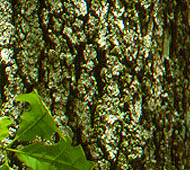