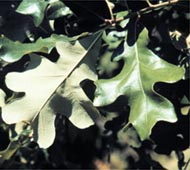 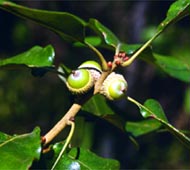 This is a small to medium-sized tree, somewhat larger than the Blackjack Oak, but generally not as large as the tallest species of oaks. A 74-foot specimen of the Post Oak was recorded in Fairfield County in 1982. The Ohio Forestry Association recorded another large specimen from Vinton County in 1978: only 58 feet tall, but with a very broad crown spread of 66 feet. Bark of the Post Oak is similar to that of the White Oak, but somewhat darker: light gray to brownish, and often fissured into scaly ridges. The Post Oak commonly is associated with the Blackjack Oak. The Post Oak usually grows in dry, sandy to rocky soils. Also, however, it is found growing in moist soils of flood plains along streams. It occurs along much of the Atlantic coast, and throughout the southeastern United States from Massachusetts to Texas and Oklahoma. In Ohio this tree grows farther north than the Blackjack Oak, but still is limited to south-central and southeastern counties. The wood is hard and strong, and is very durable when in contact with soil. Its use is mainly for posts, railroad ties, mine props, and sometimes as fuel. Larger trees sometimes are cut into lumber that is sold as White Oak. In fact, the Post Oak sometimes is called the Box White Oak. 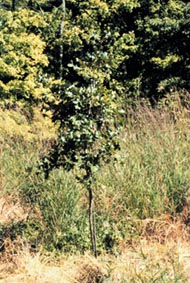 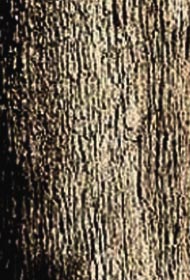