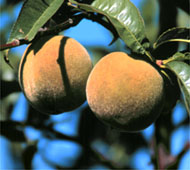 Before land prices increased dramatically and winter storms destroyed orchards the Peach tree was a common sight in the vacationland along Lake Erie. Still today, Ohio has peach orchards in many parts of the state. The smooth bark of the Peach tree is dark reddish-brown in color. It becomes rough in older trees. The Peach is a native of Asia. People have cultivated it for its fruit since ancient times. Colonials introduced it early into North America, and the Native American Indians planted it widely. Reportedly, Spanish colonists brought the Peach with them when they were active in Florida. In more recent times horticulturists have developed numerous varieties of the Peach, many for their fruit and others as ornamentals for their flowers. The Peach has escaped cultivation and grows wild in parts of the eastern United States, particularly the Southeast, in southern Ontario, and in California. As a naturalized tree it can be found in thickets, along roadsides, and in fencerows. In Ohio a Peach tree occasionally grows from a discarded seed, but probably the tree is not established as a self-seeding wild tree. 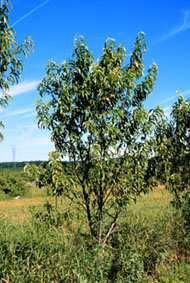