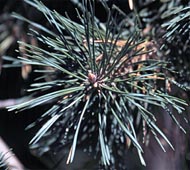 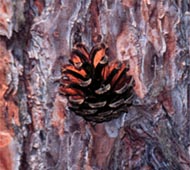 The Scots Pine is not as big a tree as some of its relatives. In 1987, one of the tallest specimens of this species in Ohio (Huron County) was measured to be 45 feet tall. A distinctive characteristic of this tree is its scaly, bright orange-red bark, often seen on the upper trunk and branches. This bark becomes darker and very rough on the lower trunk of older trees. This tree is very tolerant of soil conditions, moisture and extremes of weather. As a young tree it grows rapidly. The Scots Pine is native to Europe and northern Asia. Apparently, it was introduced into the United States during colonial times. Originally, tree workers planted the Scots Pine as an ornamental tree. More recently, this hardy tree has been used widely in reforestation projects. In Europe the extensive commercial use of wood from this tree is similar to our use of White Pine in this country. However, the Scots Pine is little used commercially in the U.S. Young specimens of this tree often are sold as Christmas trees. 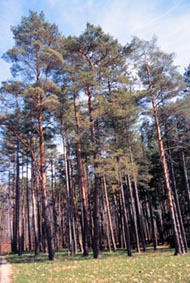 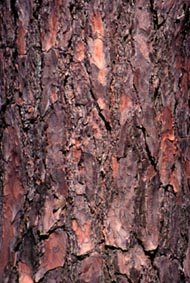