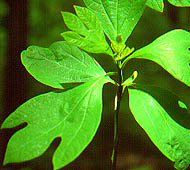 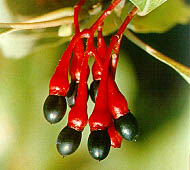 Although generally considered to be a small tree, the Sassafras sometimes reaches substantial height. The tallest specimen known in Ohio today, in Montgomery County, is 90 feet tall and has a diameter of almost 3.5 feet. The unusual leaves can be found in 3 forms, often on the same tree: 3-lobed; 2-lobed with a large central lobe and 1 smaller, side lobe; and without lobes. The tree grows in poorer soils than many other trees, and often is found in abandoned fields, along roadsides and fencerows, and on open slopes. It is widely distributed throughout Ohio, although less frequently in the northern and western parts of the state. The wood while soft, weak, and brittle is durable. It has been used for furniture as well as posts. Since the days of early settlement of the Ohio Country, Sassafras has been better known for the tea that is made by boiling the bark of its roots. Also, oil of Sassafras, which is distilled from roots and root bark, has been used in a variety of ways, including the flavoring of candies and medicines, and to perfume soaps and rubbing lotions. A variety of birds and a few mammals feed on the fruit. 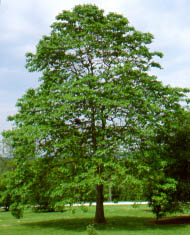 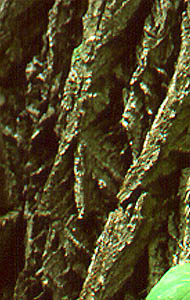 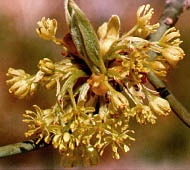