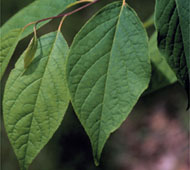 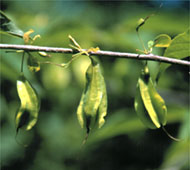 This small tree sometimes grows as a large shrub. In the southern Appalachian Mountains, however, the Carolina Silverbell can grow to 80 feet in height. In 1966, a 33-foot specimen of this tree was recorded in Wayne County, Ohio. Often the trunk divides near the ground into several spreading branches. The bark is reddish-brown. On older trees it becomes fissured into broad, thin, loose scales. It generally grows under other, taller trees in hardwood forests on mountainous slopes. It often is found in moist soils along mountainous streams. The Carolina Silverbell has an irregular, disconnected range in the southeastern United States, and westward to Oklahoma. Ohio barely touches the northern limit of its range in this area. Lucy Braun records a single record of a wild tree from southern Scioto County. Although of limited supply, workers sometimes use the wood. Landscapers often plant the Southern Silverbell for its bell-shaped flowers. 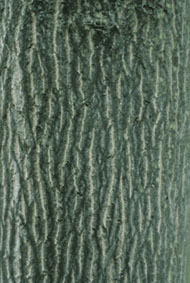 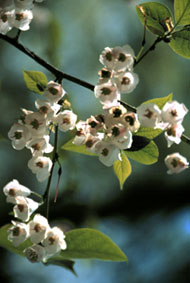