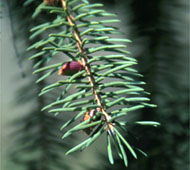 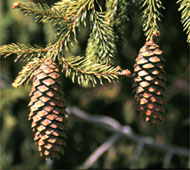 The bark is reddish-brown and roughened with thick scales. Twigs also are reddish-brown and somewhat rough. The cones are the largest of the spruces. In 1987, the Ohio Forestry Association recorded a 90-foot tall specimen of the Norway Spruce in Summit County, Ohio. This tree generally grows taller than its relative, the White Spruce. The Norway Spruce can tolerate a great deal of cold, winter weather. It grows well in a variety of moist soils in temperate habitats that are humid and cool. In its native habitat of northern and central Europe the Norway Spruce is a very important commercial true. As an introduced tree in the United States, including Ohio, it is planted as an ornamental. And it is widely used in replacing forests. Also, the Christmas tree industry cultivates and uses this tree. 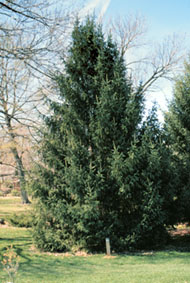 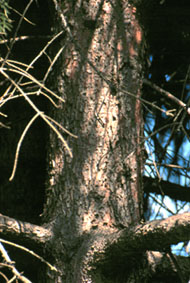