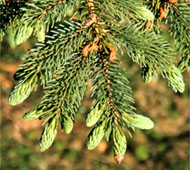 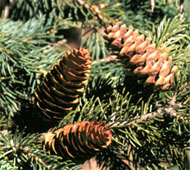 This is a medium-size conifer. A specimen recorded in Wayne County, Ohio, was 45 feet tall in 1963. The outer bark of the White Spruce is ash-brown in color, sometimes with a grayish cast. It is thin and scaly. When freshly exposed, the inner bark is silvery. Crushed needles from some specimens of the White Spruce release a very disagreeable odor, compared by some with that of a skunk. As a result, some people call this the "Skunk Spruce." This tree generally does not grow as tall as its relative, the Norway Spruce. The White Spruce can tolerate a great deal of cold, winter weather. It grows throughout much of Canada and Alaska, as far northward as trees will grow. In the United States it is native to parts of the northernmost states. In Ohio and elsewhere this tree is used as an ornamental. This is an important commercial tree in Canada where it is a major source of pulpwood. Native American Indians have used the pliable roots of the White Spruce for lacing their birch bark canoes, as well as in making various objects. 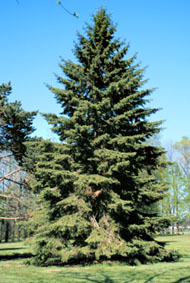 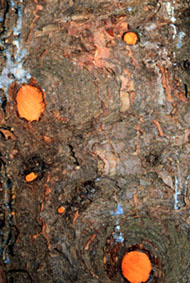