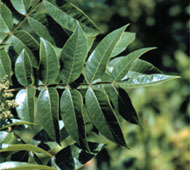 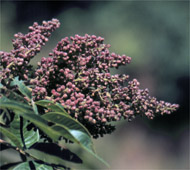 This small tree has a short trunk and open, spreading branches. It also grows as a shrub. The bark is gray to light brown, and often is tinged with red. It is smooth on younger trees, roughened and scaly on older trees. The leaf stems have wing-like projections between the leaflets, a characteristic that separates this species from other sumacs. The Dwarf Sumac grows on dry hills and rocky ridges. It also grows along forest edges and roadsides, and in clearings and old fields. This tree ranges from New England southward into Florida, and westward to Kansas, Oklahoma and Texas. In Ohio it grows mainly in the eastern half of the state and on the acid-soil flats of the southwestern counties. People sometimes plant this tree as an ornamental. Many birds eat the seeds: grouse, quail, pheasants, many songbirds. During the winter season deer often browse the twigs, and rabbits eat the bark and twigs. 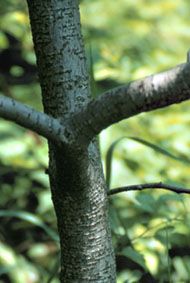 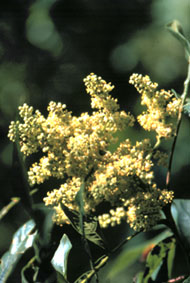