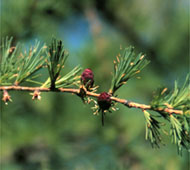 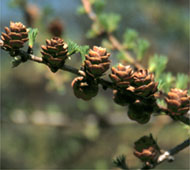 The bark of this tree is thin, gray to reddish-brown, and is roughened with small, circular scales. Its needles grow in clusters on short, spur-like branches. The Tamarack and the Bald Cypress shed all of their leaves in the fall, the only native conifers to do so. The Tamarack is native to Canada and Alaska, where it is found as far north as trees are able to grow. It also occurs naturally in the northeastern U.S. including the Great Lakes region. In Ohio it grows in the wet soils of bogs and in the borders of ancient, glacial lakes. This occurs in several northeastern counties, and to a lesser extent in northwestern counties of the state. In the southern part of its range, such as in northern Ohio, the Tamarack usually does not grow as large as it does to the North. Wood from this tree is very hard and strong, and is long-lasting when in contact with soil. Its main use is in making railroad ties, telephone poles, fence posts, and sometimes in shipbuilding. The Red Squirrel and a few kinds of birds feed on the seeds. 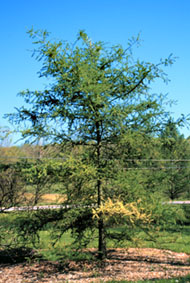 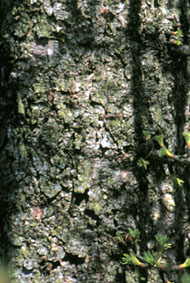