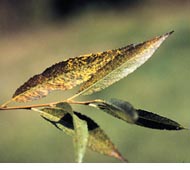 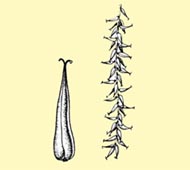 The bark of the Crack Willow is dark brown to gray or black and is rough, deeply furrowed and heavily ridged. The twigs are yellow, although not as much so as those of the White Willow, or sometimes brownish. Also, the twigs are distinctive in that they are very brittle at their bases, and easily break off. This characteristic gives the tree its common name, as well as its specific name fragilis. The Crack Willow grows well as an escaped tree in moist soils. The Crack Willow is native to Europe and western Asia. It was introduced into North America during Colonial times when it was intentionally planted. Later, it escaped and now is found in southeastern Canada and the northeastern United States as far south as Virginia, and westward to Kansas and South Dakota. It has been recorded from more than 1/3 of the counties in Ohio. Although it is commercially important as a timber tree in Europe, wood of the Crack Willow is of little use in the United States. Still, people have planted it in this country for its shade and as an ornamental tree. 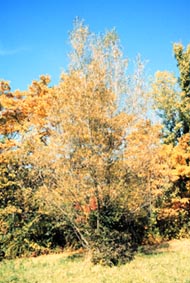 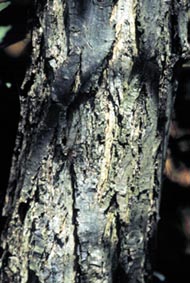