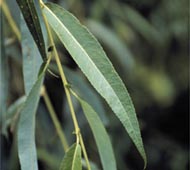 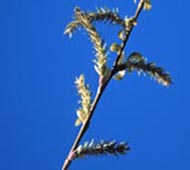 This short-trunked tree has long, drooping branches, a character which gives it its common name and helps distinguish it from other willows. Some of the longer branches may reach the ground. The bark is rough and gray. It is marked by long, branching ridges, resulting in rather deep furrows. It grows well, especially near water, and cuttings of twigs or branches root easily in moist soil. The Weeping Willow is a native of China and has been introduced into many parts of the World. In North America it is found from southeastern Canada southward and westward to Georgia and Missouri, and also can be found in western states. In Ohio this tree probably can occur just about anyplace where there is enough moisture and there are people to plant it. The Weeping Willow has been planted for shade and as an ornamental in the United States since colonial times. It is rapid growing, but short-lived compared to many other trees. Sometimes older specimens will become messy and unattractive when allowed to crowd buildings and to accumulate dead branches. 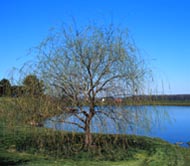 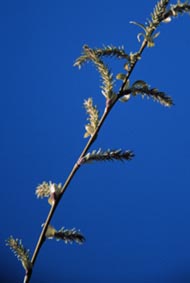 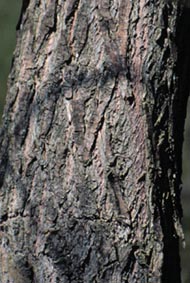