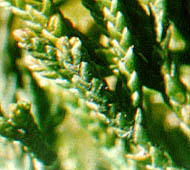 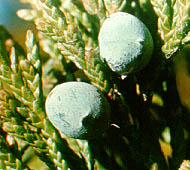 Another medium-sized "evergreen" tree, this juniper grows to 30 to 50 feet and 1 to 2 feet in diameter. In contrast to the flattened branchlets of the Northern White-Cedar, scales on mature Red-Cedars cover the rounded branchlets on 4 sides such that the stems appear square. Also unlike other similar trees in Ohio, the small fruit of the Red Cedar is somewhat fleshy, making it look more like a berry than a cone. As they develop at first, these fruits are green. As they mature they turn blue and then are covered with a gray, waxy material. Similar to the Northern White-Cedar, the thin, light reddish-brown bark of this tree sheds in long, narrow, shredded strips. This tree prefers moist to swampy soils, but does well on poor, dry soil. It prefers limestone soils such as found in western Ohio. Similar to the Northern White-Cedar, the durability of the wood of this tree makes it useful as fence posts. Also the wood is used in making such things as moth-resistant chests, pencils and some furniture. One or two other junipers, which generally are northern trees, may occur in northern Ohio. 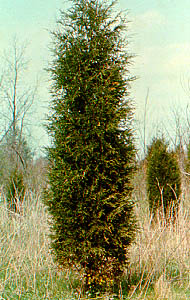 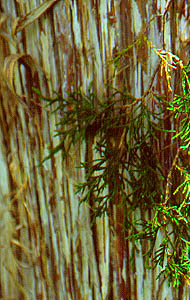 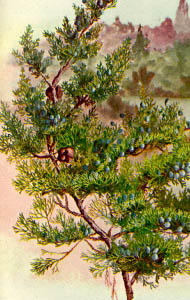