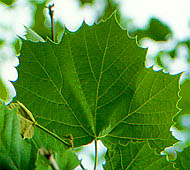 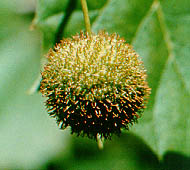 Although not the tallest, this probably is the largest in diameter of trees in the eastern United States. The record holder in Ohio today has a diameter of more than 15 feet and a circumference of 48.5 feet. It probably would require at least 8 grown persons, holding each others' hands, to reach around this massive tree. This giant is 129 feet tall and grows in Ashland County. In keeping with its size, Sycamores have the largest leaves of any native tree in North America. Frequently, the trunk of a Sycamore will be divided into several large, secondary trunks. The bark of the Sycamore perhaps is its most striking feature: mottled creamy white and brown with the darker bark of older trees peeling away from the lighter-colored, younger bark. Typically, the Sycamore grows on bottomlands, floodplains, and on the banks of streams. It grows throughout Ohio. The tough, coarse-grained wood is difficult to split and work. It has various uses, including butchers' blocks. A few birds feed on the fruit, and several mammals eat twigs and bark. The related Oriental and London Planetrees are ornamental shade trees, frequently planted along streets. They can be distinguished from the Sycamore by the fruit: usually borne singly on long stalks on the Sycamore, but in strings of 2 to 4 on the Planetrees. 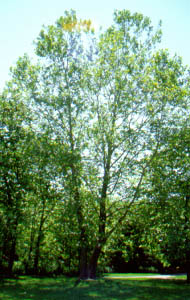 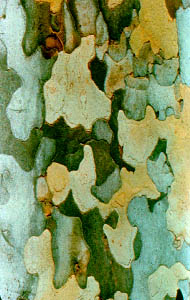 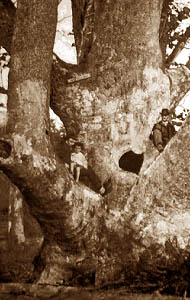