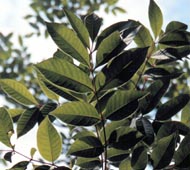 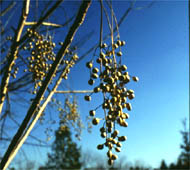 Poison! Do Not Touch!

Look at a tree book if necessary, but learn how to know this dangerous tree before you touch any sumac! The Poison Sumac tree generally is somewhat taller than the Dwarf Sumac, but smaller than the Staghorn Sumac. As with the other sumacs it also grows as a shrub. The bark is gray to blackish and either smooth or slightly streaked. The sap is clear, but quickly turns black when exposed. The fruits are distinctive: white, shiny, and waxy berries. All parts of the tree, including the sap, are poisonous! One author describes this poison as "a violent skin irritant," and he says that "Some persons are more susceptible to the poison than others." Another author describes this as "One of the most dangerous North American plants [that] for many people, causes a rash upon contact." And it must be noted that any contact from the Poison Sumac with eyes, mouth, or nostrils would be extremely dangerous! In any case, a person who even suspects contact with any part of the Poison Sumac plant should wash the exposed skin at once and thoroughly with strong soap and water. A physician's advice should be sought as well. The Poison Sumac grows in wet soils such as in bogs, swamps, and swampy woods. Also it can be found in flooded areas and in shaded hardwood forests. The tree is found in parts of eastern North America from southern Ontario to eastern Texas, especially in the coastal plains and the Great Lakes region. In Ohio it grows mainly in the northeastern part of the state, but also southward in isolated bogs. The Poison Sumac has no commercial value. Since the tree often is considered to be attractive, some people might be tempted to transplant it as an ornamental. That would be a very unwise thing to do! The fruit of the Poison Sumac, however, is not toxic to birds and mammals. Many kinds of wildlife, including quail, pheasants, grouse, and rabbits, feed on the fruit, especially in the winter.

Poison! Do Not Touch! 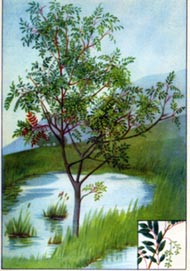 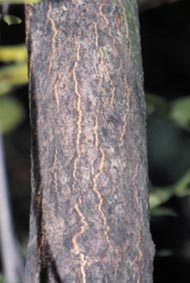