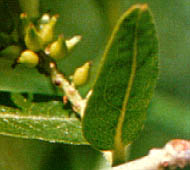 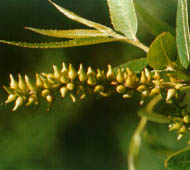 The Black Willow is one of the largest of approximately 100 kinds of willows that grow in North America. The long and narrow leaves often have small, leaf-like structures (called stipules) growing on either side of the leaf stalk at the base of each leaf. This rapid-growing but short-lived tree grows in bottomlands and along stream banks. As with many willows, the Black Willow generally grows in moist soils. It is the most common willow in Ohio and can be found growing along most streams. The soft, weak wood is used for boxes and making charcoal. The tree also is useful in holding stream banks in place, protecting them from stream erosion. Approximately two dozen different willows are found in Ohio, including the well-known Weeping Willow, and the Pussy Willow, a large shrub. 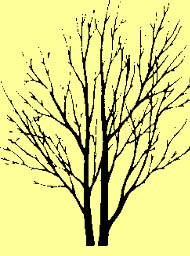 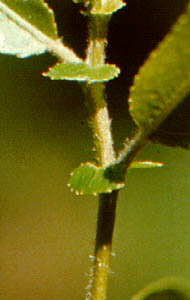